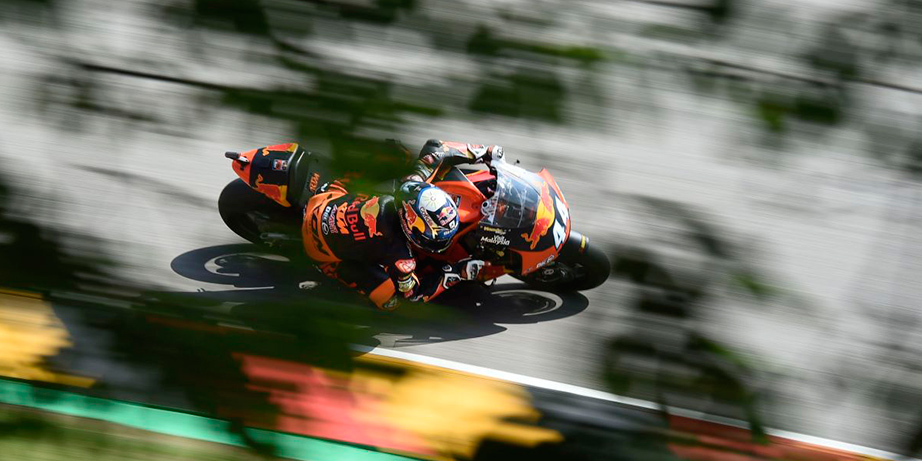 This Sunday 5th of August it’s the Monster Energy Grand Prix in the Czech Republic. In another entry we talked about the Red Bull KTM Ajo, the team we sponsor, that will be there with its two star drivers Miguel Oliveira and Brad Binder.

Big expectations for this new date of the championship, in the hope of improving the third place achieved by Oliveira and the sixth of Binder lastyear. This circuit presents very special features for both the drivers and the audience. Placed in the middle of a green hills landscape, it winds through these hills leaving some changes of course really demanding for the machines.

In the case of Moto2 19 laps of 5400 m will be completed, a little more than 100 km of route in total. A circuit where the drivers achieve speeds of more than 260 km/h in this category and where the brakes are submitted to an extreme effort. They will face 8 right curves and 6 left, the most demanding being the 3rd left curve, where they arrive after the rapidest line, in here they arrive to 260 km/h and they have to slow down to negociate the 90º of the curve, bending the motorbike to a heavy slowdown, from 260 km/h to 105 km/h.

All the energy goes to the brake discs, which reach a high temperature after this big effort. Temperature that they retake quickly to keep working in full performance in the next right curve, also of 90º, but after a short line.

The calendar is in the half of the championship and Miguel Oliveira is in 2nd position with 141 points, only 7 points below Francesco Bagnaia who leads it with 148 points. Brad Binder is 6th with 91 points and everything is yet to be decided. There are still many dates ahead and a big amount of points at stake. For now, we have to wait to see what happens in the Monster Energy Grand Prix of this Sunday.

For the ones who travel to this beautiful country, placed in the heart of Europe, they will find 12 monuments which are UNESCO World Heritage. The Czech Republic, whose capital is Prague, is perfectly communicated and specially Brno, the second city and headquarters of the circuit, is known for its historic center and a cheerful nightlife.

We’d so like to be able to spend the weekend in such a beautiful country like the Czech Republic and enjoy the live Monster Energy Grand Prix.