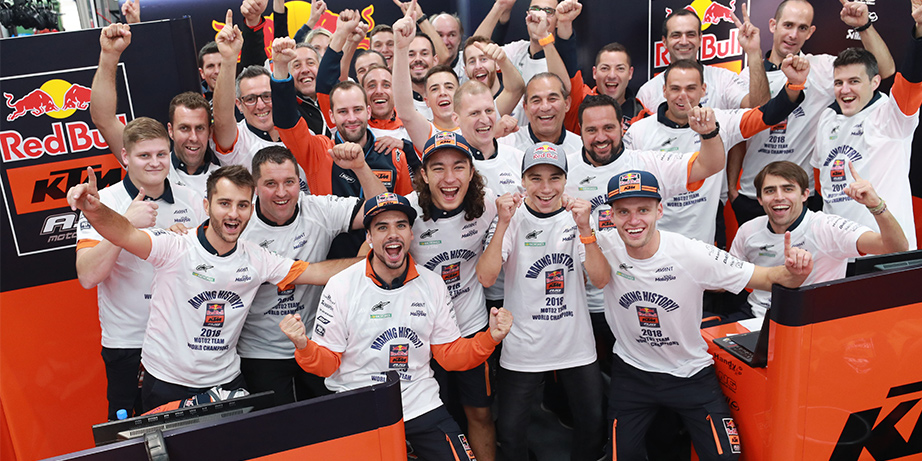 In NG Brakes we’re celebrating since last weekend, because the Moto2 team we sponsor, the Red Bull KTM Ajo, has won the Moto2 Team World Champions title this Sunday in Valencia.

The team, formed by Brad Binder and Miguel Oliveira, has achieved a total of 498 points that have given it the honour of becoming the winner team. This is not something random, as both riders have had a really good season, carrying 6 victories and a total of 15 podiums in all the races of the 2018 season.

Thanks to Miguel Oliveira, who won the race this Sunday in Valencia, both riders finished second and third in the ranking and they received the honour of winning this title, which is even more deserved if we consider it is only the second year in which Red Bull KTM Ajo participates in the Moto2 competition.

You have already seen in our social media like Facebook and Instagram that we’ve been following the progress of Binder and Oliveira very closely, always cheering them up to achieve the best results. In NG Brakes we are very proud of them, because they’ve done a great constant job all the season, and this victory just confirms that sponsoring their team has been a good decision: the Red Bull KTM Ajo has demonstrated positive values of effort, constancy, merit and talent, with which we really identify ourselves.

Besides of that, we are also proud to know that there has been another element which has clearly influenced in this victory and are partly from us: the brake discs of the Red Bull KTM Ajo Moto2 team are products from NG Brakes. This reaffirms that our brake discs have a maximum performance and a high quality, result of a constant investigation and innovation to improve the technology in the braking world and to make the best product possible both for the competition and the regular riders.

To finish, we want to congratulate Brad Binder, Miguel Oliveira and consequently the whole Red Bull KTM Ajo team for this both deserved and exciting victory, and we can only express our wish to maintain the relationship with this team for a long time.