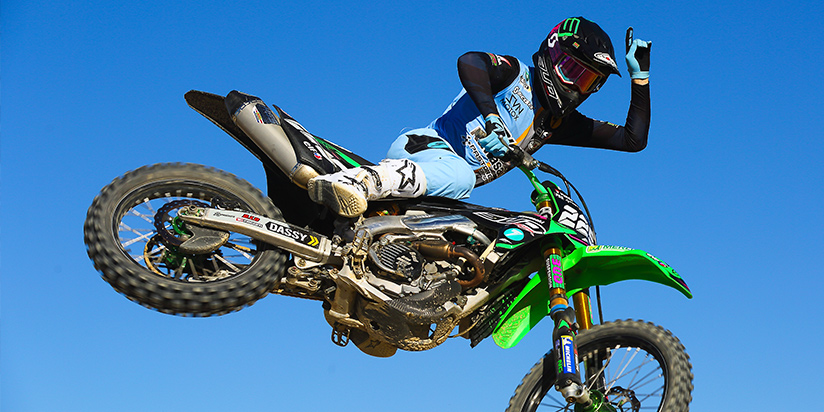 The following 10th of March the first date of the 2019 World Motocross Championship calendar will begin in Argentina, in the circuit of Villa La Angostura. A huge variety of countries from Asia and Europe will take their assigned dates, unfortunately, this year Spain has refused the organisation of a GP and leaves the 2018’s one celebrated in Castellón with no repetition.

This Motocross championship that starts in Argentina will end the 29th of September with the Nations GP in Assen, Netherlands.

In 2018 the Motocross championship was won by Jeffrey Herlings, the Dutch pilot of KTM followed in the podium by Antonio Cairoli and Clement Desalle. Regarding brands, KTM had the World Prize of brands, followed by Kawasaki and Yamaha.

As a brand supporter, this year we’ve put special interest in the sponsorship of the BUD Racing Kawasaki team, that comes back to the World MX2 Championship. The team with headquarters in Hossegor France continues with its usual spirit of supporting young talents and project them on a worldwide level.

Their three star-pilots will be the German Brian Hsu #81, the French Brian Moreau #225 and Jimmy Clochet #520, also French. Precisely the Bud Racing Kawasaki team competed this past weekend in the final of the Italia Open, which took place in the Mantova circuit. A first successful start for Brian Moreau, who made the podium in the MX2, while Brian Hsu came back to the competition after a long absence.

The winner of this competition was the Galician Jorge Prado, a great value who’s barely 18 years old. In the MXGP category, the incontestable winner was Toni Carioli. The big absent was Jeffrey Herlings, who was injured at the end of January, training in Albaida (Spain) and he suffers several right-foot fractures, something that jeopardises his presence in the first GP in Argentina.

We’ve also renewed sponsorship with the VHR KTM Racing Team, a historic one of the World Championship owned by Bruno Verhaeghe, a great pilot from the late 80s.

In NG Brakes we’re expectant before such a challenge, good luck to all!