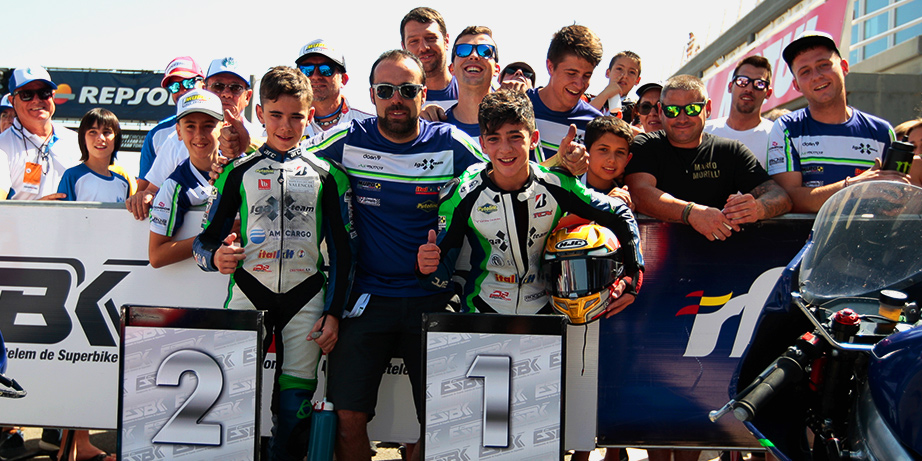 The sponsorship of NG Brakes keeps adding teams to its structure, we have signed a support and collaboration agreement with the Igax Team. This team is present in the competitions of FIM CEV Repsol and ESBK with seven motorbikes which we equip with the best competition discs, designed and tried for every capacity.

The words of their Team Manager Álex Martínez explaining this pact are very eloquent. “We are very satisfied of having reached this agreement. NG Brakes will help us a lot to grow and our riders are delighted with their new discs.

In the last competition in the ESBK in Albacete we already used them, and the result was unbeatable with the victories of Marco Morelli in PreMoto3 and Dani Domínguez in 85GP”.

The structure of the Igax Team has a cadre of riders that stand out in each category and that more sooner than later will be heard in the headlines of the competition world.

ONDŘEJ VOSTATEK, of Czech nationality that competes with the KTM RC250 GP.

FILIP ŘEHÁČEK, of Czech nationality and competes with the KTM RC250 GP.

DAVID REAL, from Valencia competes with the BeON.

DANIEL DOMÍNGUEZ from León with a RMU. First in the Albacete competition.

MARCO MORELLI from Terrassa (Barcelona) with a BeON. Recent winner of the Albacete competition.

MARCOS LUDEÑA from Valencia competes with a RMU.

So far this season, Daniel Domínguez has achieved 5 triumphs in 6 races and he’s set to become the best candidate to get the title in the next competition in Navarra.

Marcos Ludueña, the youngest rider on the team, keeps standing in the podium and he promises big satisfaction to the team in a very near future.

NG Brakes supports the world of the competition because it’s the best laboratory of the products. This way, the temperatures and frictions carried to the extreme are the best guarantee of the products.

The maximum features for something as determinant as braking, your street motorbike will add a safety plus with our brake discs.