Ace Cafe, the origin of the Cafe Racer

Home/General/Ace Cafe, the origin of the Cafe Racer 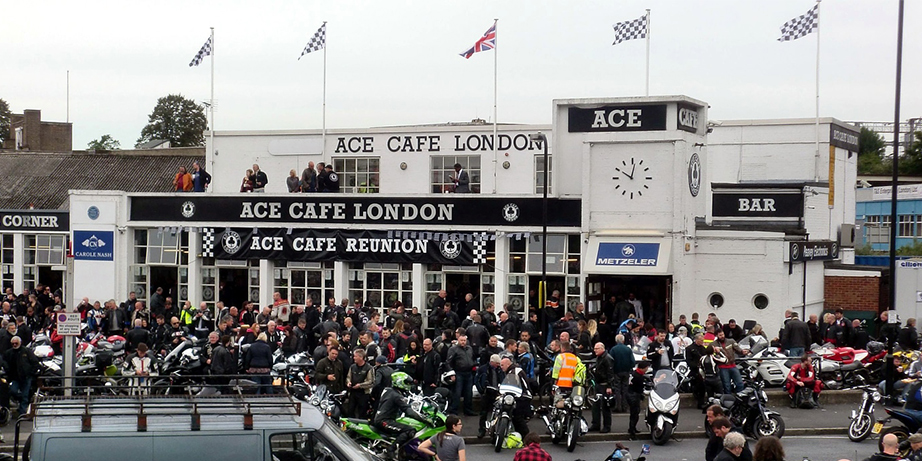 The history of motorcycles, motorcycling and its protagonists has become a legend over the years. This is the case of a typical roadside bar that over time gave rise to a trend. We are talking about the Ace Cafe, whose life is linked to the Cafe Racer movement.

Although it seems normal to us now, in the first half of the last century, back in the 1930s, London already had a series of roads that decongested urban traffic. Ring roads that served to divert the passage of trucks and delivery vans from the city center and shorten the travel time.

Along these routes, a series of bars, cafes, restaurants and gas stations were established with the purpose of supplying those who used these alternative routes.

One of them, the Ace Cafe, in its second stage became the meeting point for bikers of the time. It was born in 1938, just one year before World War II. It was then destroyed by bombing and was reborn in 1949. Located at the London West End exit of North Circular Road, it was open 24 hours a day, 365 days a year.

The motorcycling public that frequented it went a step further, and far from being content with sharing mechanical tricks or stories of speed, they turned the conversations into pure vertigo.

Those roads didn’t have speed controls, so challenges soon appeared. Everything was very simple and authentic: the duration of a song in the jukebox was the stopwatch, and depending on the chosen route, it allowed reaching speeds of 160 km/h or average of 110 km/h for a circuit. Those tours were just over 3 km if they chose the direction of the Iron Bridge, or just over 5 if the point was Hangar Lane.

The peculiar aesthetics of these bikers always had a robust leather jacket, and the bikes were from popular brands for the time such as Norton, Royal Enfield, Triumph, BSA, Vincent and Matchless, or customized like the Triton, Tribsa, Norvin, etc. .

They were conveniently lightened to gain aerodynamics. The semi-handlebars and the lagging stirrups were what predominated, and since their mechanics were relatively simple, they were normally repaired and conditioned in any garage.

This legendary café had its splendor in the 50s and 60s, and closed its doors in 1969. In 1994, Mark Wilsmore, a motorcycle fan, wanted to commemorate 25 years of the Ace Cafe and managed to gather approximately 12,000 fans at that point. As a result of that initiative, they began to rebuild the Ace Café again and it is currently a meeting point for nostalgic and passionate Cafe Racer.