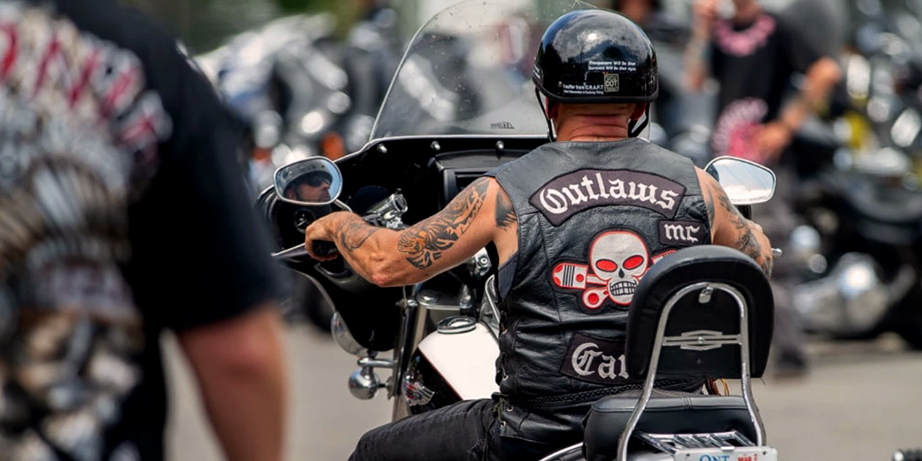 We do not doubt for a moment the majority, that famous 99% of bikers that we explain in our article about the history behind the mythical 1% patch. But there are always black sheep in the corral and some of those gangs have woven their past with violent episodes that have given it a halo of misunderstood epic and consequently they have increased their power radiating a posture of bad, very bad, which attract so much… we leave it there.

In 2008 and for 7 seasons that led to 92 episodes, a series based on a biker club that wielded their power in the fictional city of Charming (California) aired: Sons of Anarchy. It tells the story of “Jax” Jackson Teller, who from his position as vice president of the organization begins to question his actions and those of his group. The series received very good reviews: “Sons of Anarchy may be a wild fantasy and a melodrama, but all this is disguised by a feeling of truth,” says Hank Stuever, critic of The Washington Post.

If you are one of those who have seen the series or those who are surely going to see it after reading this blog, you have to look at a detail. The patch that some of the bikers wear on the jacket, “Men of Mayhem”, means that the man who wears it has killed someone at the order (or for the benefit) of the club. Very significant fact in the context that we are explaining.

Because this is just an example recreated for the media where a fictional story is told, but that surely has been inspired by real life. These clans or gangs have always highlighted two differential aspects: the camaraderie between the members and the love for motorcycles. Perhaps that is the source of all his adventures?

If you are curious about this topic, you should know that The Warlocks has such a brutal reputation that many illegal bikers refuse to associate with them. The gang has a history of extreme, rampant violence, including attacks on rival leaders and indiscriminate killings.

Detroit’s Highwaymen are relatively small compared to the Hells Angels. But that has not stopped them from earning their bad reputation. The club was founded in the 1950s and has been the subject of several large-scale investigations. In 2007, 40 of its members were arrested on charges ranging from organized crime to police corruption. The gang’s leader, Aref “Scarface” Nagi, was sentenced to 37 years.

Some jobs are so dirty that even America’s most feared clubs won’t do them for fear of getting hooked. When that’s the case, gangs call a “support club,” a smaller group that sells drugs and commits violent crimes at the behest of the mother club. The Black Pistons Motorcycle Club is the Outlaws’ official support club, and its members have been involved in crimes across the United States, including a drug distribution network in Georgia.

El Forastero (original name in Spanish) is a classic example of a “second level” gang. It doesn’t have the reach of a club like Outlaws or Hells Angels, but its members are capable of distributing methamphetamine and stealing motorcycles. This gang was formed in Sioux City, Iowa, in the early 1960s.

And we close the chapter with two of the most famous. The Outlaws, founded in 1936, are believed to be the world’s oldest outlaw motorcycle club, and have only grown stronger with age. With nearly 2,000 members in hundreds of clubs, they have a massive influence on drug trafficking along the Canadian border and control large stretches of the Great Lakes region. The club’s criminal record sheet includes criminal offenses across the United States. They may be the Hells Angels’ biggest and toughest opponents.

And the Hells Angels. When you think of outlaw motorcycle gangs, you probably think of the Hells Angels. This group has become so well known that it is incorporated into everyone’s imagination regardless of your place in the world. Legal business aside, their aggressiveness has led them to disputes with many of the other clubs on this list, and without going into more punishable details, much of those clashes are for wanting to usurp their identity without being entitled to it.