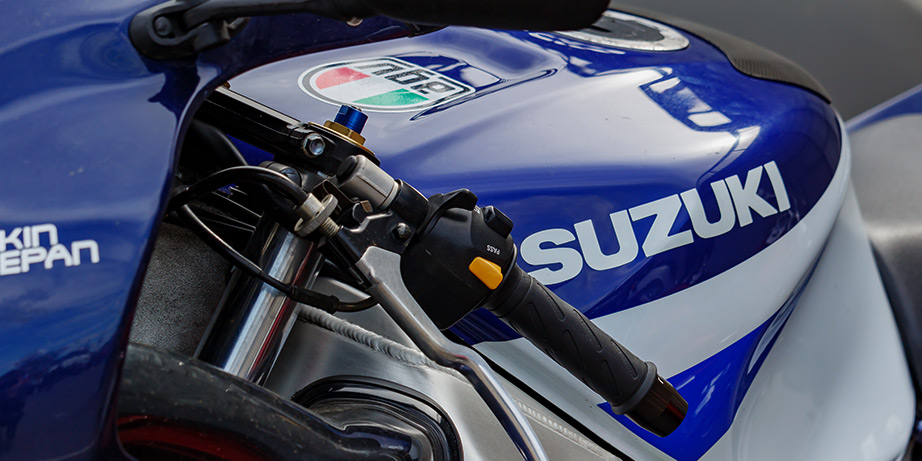 Previously, in our tour of the Japanese Big Four, four firms that marked a before and after in the world of motorcycling, we talked about Yamaha and Honda. Today it’s Suzuki‘s turn.

The Suzuki story is the result of its owner’s vision of the market vicissitudes of his time. In 1909, Michio Suzuki (1887-1982) started up one of Japan’s leading companies in the textile industry. His looms processed the best cotton available on a daily basis to become the raw material for the tailors of the time. At the same time, thanks to a vibrant economy, Suzuki began to branch out into the automotive industry with little success. In 1951, due to the plunge in the textile sector, the brand turned to mechanics and, like other Asian entrepreneurs, manufactured a 2-stroke engine that was mounted on a bicycle, giving rise to the first Suzuki motorbike.

That engine, which they called Power Free, had a cylinder and 36 cubic centimeters, and gave way to the mythical DIAMOND FREE (1952) with 60 CC.

In 1953, the Suzuki Diamond Free obtained a resounding victory in the climb to Mount Fuji, one of the most emblematic events in Japanese competition. In 1954, the company was renamed Suzuki Motor Corporation.

Then follows the COLLEDA COX (1955), with a 4-stroke, single-cylinder, 123-cubic-centimetre engine, consolidating the brand within a very competitive market.

Over the years, the brand introduced some significant solutions to the motorbike market, but in some cases it ended up mimicking models from the era of rival brands. Until the end of the 1960s, Suzuki was a major player in the small-displacement motorbike market. In 1968, the Suzuki T500 with 492 CC and 47 HP was born. The first high-capacity competition bikes of the brand were derived from this model.

We skipped a few years to arrive at one of the most recognized models, the Suzuki Katana. This bike was almost faithful to its prototype created by the German designer Hans Müth and we knew it by the full name of GSX1100S KATANA, a 4-stroke, four-cylinder, 1075 CC beast capable of delivering 101 hp.

In the second half of the 80’s, due to the great worldwide diffusion of the Paris Dakar Rally, all the manufacturers launched off-road motorbikes similar to those used in the desert, but with an urban commitment. The Suzuki DR750S, a 727 CC, 50 bhp 4-tonne, leaves a deep impression in terms of design.

The Suzuki DR750S‘s front fairing was extended as a wing, leaving a pronounced appendage to the actual wheel wing. This fairing design set a benchmark for almost all manufacturers who had such an off-road trail bike.

The success of that decade was crowned with the GSF400 BANDIT, a model whose sales level amazed the Japanese managers themselves. A motorbike that had been born for the Japanese market, suddenly becomes a flood of orders from the Western market. This sporty naked bike is still riding in tune with current models despite being designed more than 30 years ago.

But Suzuki’s technicians and designers had a dream: to create and produce the fastest production bike. And this dream was born in 1999 with the iconic HAYABUSA GSX1300, 1298 CC and 175 HP of pure speed. It maintained its reign as the fastest road bike for the past 20 years, when it was finally surpassed by 200-horsepower engines.

The GSX-R1000 once again demonstrates the excellent vision of Suzuki’s designers in moving a racing machine (World Superbike) onto the urban road and making this model a top seller in its segment.

If you want more information about Suzuki’s current affairs you can visit their website.