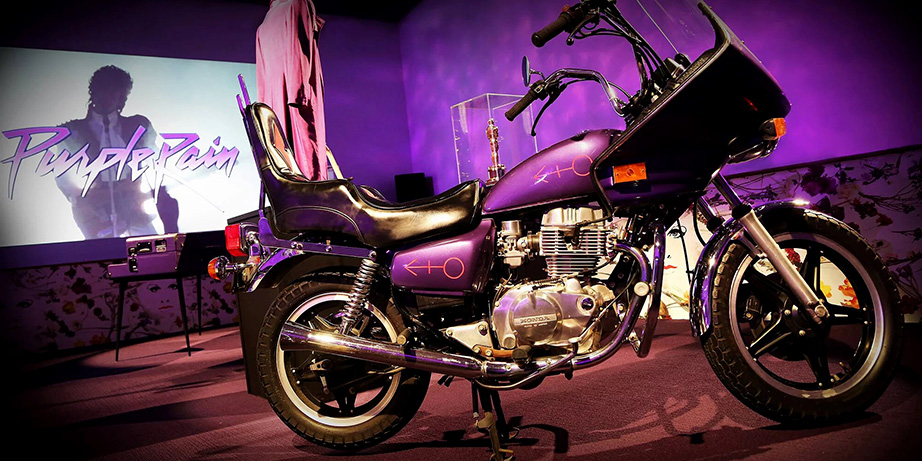 The little genius from Minneapolis, Prince, released a brilliant album in 1984 that became a cult object. We are talking about Purple Rain.

On the cover of the album from late 1984, we see Prince riding a striking motorbike with a front fairing, raised handlebars and a backrest that many believed to be a Harley Davidson. It’s important to point out that Prince had a very slim body weighing less than 50 kg and a height of 1.60 metres, and, curiously, in the aforementioned photograph he looks absolutely proportional to the motorbike. Therefore, knowing this fact, if we take proportionality into account, it’s impossible that the motorbike Prince rode on the Purple Rain album was a Harley Davidson.

Prince took this photo on top of a custom Honda CM400A. This model produced by Honda Motor Company from 1979 to 1982 was an automatic, two-cylinder, and equipped with electronic ignition.

The seat is upholstered in black leather with purple-hued diamond-shaped inserts, and the fairing was a 1970s Vetter Windjammer model, although Tommy Summers says it’s actually a Howe Kutter. As for the colour used, it’s Mopar’s Plum Crazy C7.

The album Purple Rain was the soundtrack to a film with the same name, Purple Rain. In it, The Kid (Prince) is a poor musician tormented by family problems, and replicates his father’s mistreatment towards his mother in his own love affair. Struggling to survive a turbulent family life and his own anger, his talent takes refuge in his music.

In the film you can see footage of Prince riding the bike and, as we explained earlier, in addition to being proportionate to the bike, Prince looks bigger than the bike. The bike was rebuilt for the film by Tommy Summers‘ Low Riders by Summers, a shop founded in ’79 that specialises in custom choppers.

The true dimensions, customised expressly for the singer, did not come to light, or perhaps no one bothered to find out this curious detail. In fact, in his legacy, Prince left numerous cars and three motorbikes, one of which was this tiny and curious Honda that gave a touch of vertigo to a wonderful song that was always present at each of his concerts.