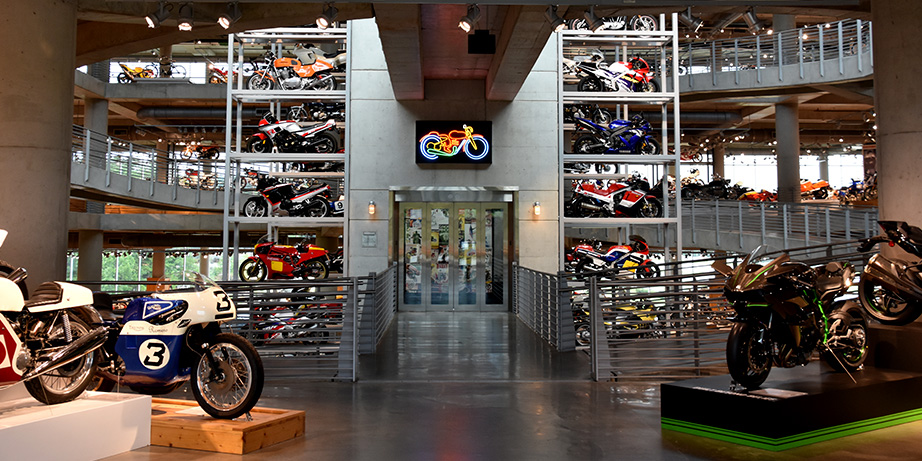 Planning a motorbike route and including a visit to a themed museum can turn a routine day out into a great trip. We have chosen three great museums that, due to their characteristics and the material on display, we believe are worth a visit at least once.

We are going to leave aside those exhibitions that the brands themselves, circuit venues or any federative institution has dedicated to the motorbike sector, and we will focus on three museums where the world of two wheels is lived and breathed from the very entrance door. The order of presentation does not establish any hierarchy, one of them simply had to be the first and the other to close the trilogy, but none of them is more important than the other!

Located just a few kilometres from Birmingham, Alabama and almost 200 km from Atlanta. With its creative architecture and great attention to decorative detail, the museum houses more than 1,600 motorbikes spanning more than 100 years of historic production, though usually about 900 are on public display. More than 200 manufacturers and brands from 20 countries are represented in the collection. From Harley-Davidson and Honda to Indian – and hundreds of other brands you can think of!

The competitive spirit and passion for the motor world of its founder, George Barber, a successful Porsche driver in the 1960s, launched this ambitious project in 1988.

In his collection, we can find exclusive pieces such as the Hildebrand & Wolfmüller from 1894, which is the first mass-produced motorbike in the world, or the Ducati 200 SS from 1959, an iconic model due to the peculiar design of the fuel tank.

Located next to Birmingham Airport (UK) and two hours from London. Founded in 1984 by Roy Richards, this museum houses the largest collection of British motorbikes, with over 1,000 motorbikes from approximately 170 different manufacturers. Well-known brands such as Triumph, Norton or BSA.

Among the most special exhibits, we can find the 1971 John Mooneyes Cooper & His F750 BSA. This machine was first ridden by John Cooper in the first Transatlantic Match Race Series as part of the British team. Among the latest acquisitions we find a Triumph TT600. The bike shown here is an absolutely original example of one of the first bikes produced in the year 2000 with great innovations on a mechanical level that marked a leap forward in this British brand.

It’s located on the long straight road between Ponts and Oliana, about 140 km from Barcelona. This museum is the particular story of Mario Soler, who, through his hands and his ingenuity, rescued a large number of old motorbikes from oblivion until he became a prestigious restorer, and gave rise to a collection of more than 190 motorbikes. The museum currently manages the exhibition of some 300 motorcycles from different private and institutional collections. It was inaugurated in 2002 and some 200 motorbikes are on display to the public.

Among the exhibits is a 1952 Nimbus 750. In the world of two-wheelers, the Nimbus brand is synonymous with rarity and exclusivity. There is also a 1924 Lutetia 175 and a 1941 Indian Military 741 500cc. This model was used by American troops during the Second World War.

We invite you to visit these museums and exhibitions on motorbikes that will bring us history, experiences and feelings very close to our particular way of understanding the world of two wheels.