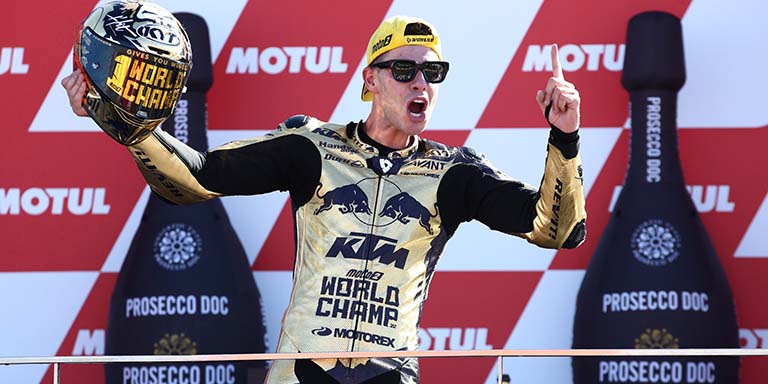 Competition, adrenaline, and the love of two wheels form the DNA of NG BRAKES. That’s why one of our key commitments is supporting the champions of today and tomorrow. Every year, we equip the motorcycles of dozens of riders across different disciplines and categories, becoming key companions across testing, practice and, of course, racing.

2022 has been an incredible season, packed with great results. Championships, runners up, victories, podiums, and lots of hard work that’s more than paid off. Here’s a rundown of our riders’ results.

Consistency was key for Augusto Fernández to crown himself Moto2 World Champion. The Majorcan made it his mission to always finish races near the top, taking risks when necessary and consolidating results, strategically, when it was called for. His incredible work, which began in preseason alongside NG BRAKES, was also complimented by the impressive season put together by his teammate, Pedro Acosta (Rookie of the Year). Together the two also ensured that Red Bull KTM Ajo won the teams’ championship in Moto2.

Another championship for NG BRAKES. In Portimão, Álvaro Díaz and the ARCO – MOTOR UNIVERSITY TEAM, after 2 wins, 7 second places and 2 third places, wrapped up the WorldSSP300 crown – one of the most competitive possible. The success tasted even sweeter as the team is made up of students and alumni from the Universidad Politécnica de Valencia. Another successful mark in favour of the young talented riders, mechanics, data engineers, communications personnel and more as they build a bright future.

In WorldSSP300, other NG BRAKES riders also shone this season, including the likes of Marc García. The Catalan rider finished the year fifth overall, with 3 victories and 2 second places.

Winning from the beginning

This year we also equipped a good number of teams in the FIM JuniorGP World Championship, across different categories. Álex Ruiz, riding with FAU55 TEY RACING, came second in the Stock category with 2 wins and a second place – a great result that speaks to teamwork, perseverance, confidence and effort.

In 2022, we also put the brakes on at national level in the Spanish Superbike Championship. Yeray Ruiz is a great example. The young rider from Malaga competed in different championships throughout the year, putting maximum effort into his passion. His hard work, dedication, and talent were rewarded as he was crowned Spanish Supersport Champion with YAMAHA MS RACING TEAM.

Pepe Osuna, meanwhile, won the Spanish SBK Junior title with a total of 5 wins and 3 second places. His pairing with DEZA BOX77 RACING TEAM, the two united thanks to top level partners such as NG BRAKES, was a match made in heaven. The team’s great work was also reflected in Antonio Torres coming third overall.

Eric La Bala is another impressive champion, after he finished the season in first overall in the STK600 category. Dani Sáez did the same in STK1000, after a year with a near-unbeatable record of 10 victories out of a possible 14.

In the PreMoto3 class, second, third, and fourth went to our riders. Álex Longarela (IGAX Team), David González (Cuna de Campeones) and Pedro Alomar (IGAX Team) were three of the standout performers of the season.

Finally, Jesús Torres came out on top in the Cuna de Campeones.

NG BRAKES discs offer the best performance and maximum levels of safety, regardless of the terrain. Proof of that is easy to find in the performance of the riders we support in national and international motocross, enduro and supercross championships.

Amandine Verstappen is a good example after finishing the Women’s Motocross World Championship in a well-deserved sixth position. As is Juan Izaguirre, who took third overall in the Spanish MX85 Championship.