An insider’s view of the Macau GP with Raül Torras 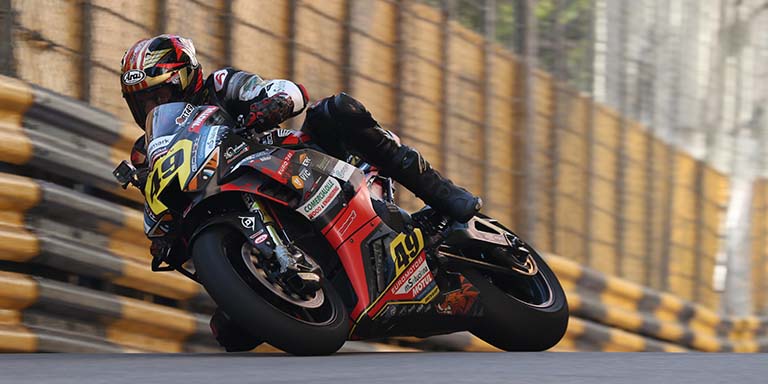 Tight, twisty and narrow, with no run off areas. This is what the Guia Circuit is like, a track that’s been hosting the Macau GP for more than 50 years. Not for the first time, this year Raül Torras was the only Spaniard who has participated in this mythical race. The motor racing competition par excellence in the Asian continent. The Catalan finished this adventure, in which he had the support of NG BRAKES and its brake discs, in an impressive eighth position, after consistently improving his times.

On a circuit like this, where the brakes never rest, it is essential to have reliable support. In the rider’s own words: “it’s crucial to count on first class partners with a proven pedigree like NG BRAKES as we put our lives in their hands.” If good braking is already “crucial” for a rider’s confidence, it’s even more so at a track like this. At other highly demanding events, such as the Isle of Man TT or the North West 200, “you have very hard braking, but then you have a long straight where the brakes can cool down and recover”. That doesn’t happen in Macau.

“In my opinion, Macau is very critical and demanding on the brakes. Not only because of the braking for Lisboa Corner, but also because the whole ‘Mountain’ area (from Lisboa Corner to the Melco hairpin) is very demanding on the brakes. The braking at Lisboa is very intense. You open the throttle hard on the exit and brake hard again, you open it again on the climb to Maternity Bend and brake hard again, lean, open the throttle and brake again… It’s a lot of “stop & go” in low gears. The brakes don’t have time to cool down. They suffer a lot from fading, and if you don’t have a good set of brakes, their performance will quickly drop. And, apart from losing confidence, if you crash, you’ll hit a wall… It’s the most critical thing for the bike on this circuit”, explains Raül Torras.

The Catalan is in no doubt. The most complicated braking zone is on the approach to Lisboa corner. “It’s impressive, from more than 300 km/h to less than 60 km/h, in a braking area of just 250 metres, between ARMCO iron walls, with a grandstand full of people and with zero margin for error. It’s a hair-raising section of track.”

Undoubtedly, the most spectacular thing about the Macau GP is the layout of the Guia Circuit itself, which has not been changed since the first Grand Prix was held there. It’s a track where those tight corners that the rider from Girona was talking about are capable of giving the viewer goosebumps even from thousands of kilometres away. A lap on board his Honda CBR1000RR-R Fireblade SP is proof. So, relax and enjoy the ride.